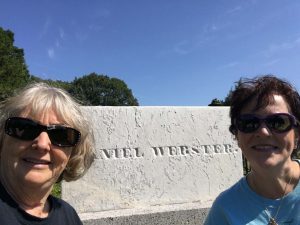 The beautiful seaside town of Marshfield extends 31 square miles along the south shore, sandwiched between Duxbury to the south and Scituate to the north.  Its year-round population is over 25,000 but swells to over 40,000 during the summer months.

Marshfield became a town in 1640 and is best known as the home of Daniel Webster for the last twenty years of his life. He became known as “the Farmer of Marshfield”.

We visited the Daniel Webster Estate, called “Green Harbor”, Webster’s country home. Webster was a renaissance man, orator, politician, lawyer, diplomat and statesman. During his political career he represented both New Hampshire and Massachusetts in Congress and the Senate. He was also appointed Secretary of State by Presidents Harrison and Tyler.

This is not the original house, which was destroyed by fire in 1878. The current Queen Anne style home was designed by architect William Gibbons Preston and built in 1880.

Although the estate was not open when we visited, we peered through the front door to take a peek into the beautifully restored home.

Currently, the Daniel Webster Preservation Trust oversees the estate.  It is available to be rented for functions.

We visited the grave site of Webster and his family, not far from the estate, and shamelessly took a selfie with the stone that marked the family plot.

Just down the street from the Webster Estate, we found the Winslow House, the ancestral home of the founding family of Marshfield.  Edward Winslow came over to the colonies on the Mayflower, and eventually became a three-time governor of Massachusetts.  He also acted as an intermediary with the Native Americans, and an ambassador from the colonies to England. His son Col. Josiah Winslow, who lived from 1628 to 1680, was the first native-born American to hold the governor’s office.

We continued our tour of Marshfield down Route 139 toward Brant Rock.  On our way we passed Gerard Farm, a staple in Marshfield since 1962 and famous for its roasted turkey products! Unfortunately it was closed the day we visited.

We stopped by the Marshfield Airport to see if any planes were coming or going but caught them at a quiet moment.

Next stop:  Brant Rock! A long stretch of beach community between Rexame Beach and Green Harbor, it has its own shopping and restaurant area that has become a destination for beach-goers.

We stopped in to visit Kim Mallios, owner of Bohemian Babe.

After getting a look at the famous Fairview Inn, we proceeded to head over to Blackman’s Point, which was originally inhabited by the Wampanoag Tribe and was a Native American camp ground! In January 1906, Reginald Fessenden achieved the first two-way transatlantic radiotelegraph transmission, exchanging Morse code messages between his stations in Brant Rock and Scotland.

After stopping in at Crystal’s Treasures for some scrumptious-smelling candles, and peering across the road at the Brant Rock Market, we decided that we had waited long enough for the famous lobster rolls at the Green Harbor Lobster Pound.

Our bellies full, we headed over to Humarock Beach. Although it’s technically part of Scituate and not Marshfield, this popular beach community is only accessible through Marshfield. The long, open stretch of beach is lined with small cottages, and just steps away from the South River that runs from the ocean past Humarock and Rexhame beaches and into the center of Marshfield.

Our last stop in Marshfield had to be the Marshfield Hills General Store, a quaint little shop attached to the post office. There were all kinds of locally-made and beachy products, a great selection of wines, and a penny candy corner to delight children of all ages. The store is owned by actor and comedian Steve Carell, and is run by his sister-in-law, Trish.

We were lucky enough to get wind of the fact that Steve would soon be visiting the store and would be interviewed by WATD, the local radio station, on their morning show. So of course, we needed to return to Marshfield to try to meet Steve and get his autograph. Were we successful?

We went back to Marshfield for the Lobster Fest in September.  Debbie has a booth for her candies, D&D Candies while Beth sampled with her husband Roger.  We ended the day with ice cream and B’s Homemade Ice cream.  What a fun time we had in Marshfield!