Beautiful Scituate, Massachusetts is nestled into the south shore between Cohasset to the north and Marshfield to the south.  It’s almost the same size as Marshfield in terms of square miles at 31, but the year-round population is only 18,000. The name Scituate is derived from an Indian word which the early settlers understood as Satuit, which means “Cold Brook”, and referred to the small stream flowing into the harbor. The town was incorporated in 1636.

Scituate has always been referred to as the Irish Riviera.

The North and South rivers flow through Scituate, allowing for great boat recreation.  The boat launch on the Driftway gives easy access to the rivers. Or head to “the spit” for a picnic at low tide.

The Men of Kent Cemetery dates from the earliest days of Scituate’s settlement, estimated to have been established in 1628. It is the town’s oldest cemetery, containing the graves of some of its original settlers. The ¾ of an acre cemetery is also the site of the town’s first meeting house, built in 1636. The cemetery is so named because Scituate was founded by colonists from the English county of Kent.

A walk down Front Street takes us to the Lucky Finn, where we grab an ice tea and enjoy the view overlooking the harbor.

We also stop by Joye, a cute gift shop next to the Lucky Finn, which is, in their own words, “Filled with colorful scarves, bags, jewelry and handmade items”.

On to Cole Parkway and the town marina, where we will meet Hawk Hichcock and his dory! Hawk, a retired Mosser, gives rides through Scituate Harbor in his dory.  Our trusty navigator Debbie didn’t warn Hawk that we were about to run aground! I failed to capture it on film, being intent on whether we were about to capsize, but Hawk had to jump out onto the rocks and give the boat a push, nearly causing him to take an unplanned swim. It was pretty hilarious!

We made it to the Scituate Lighthouse on the north end of the harbor and got out to explore a bit.

We had more to explore in Scituate, so we headed to the Lawson Commons, home of the elephant fountain.

Lawson Tower is, believe it or not, a water tower which was constructed in 1902 by Thomas W. Lawson, a prominent businessman and author. According to local legend, when the water tank was originally completed (without the encasing tower) Lawson’s wife complained that it ruined the view from their home. Lawson went to Europe and hired an architect to design the tower around the original tank. At the top of the tower rests an elaborate set of ten bells, ranging in size from three hundred to three thousand pounds. 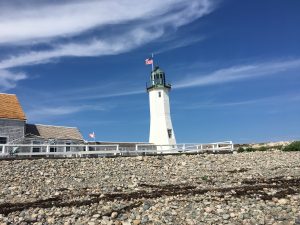 We drove through North Scituate, its own little village with a commuter rail stop on the Greenbush line. This led us to the beautiful, rocky coast of Minot Beach.

Heading back to the harbor, we stopped to look at the famous Barker Tavern, a staple in the community since 1978. But the building itself has a much longer history.

We chose The Mill Wharf Restaurant for dinner in order to enjoy one last view of the picturesque harbor before we headed home.

The last stop was Nona’s homemade ice cream, because, well, no trip is complete without ice cream!