The mission of Two Grannies on the Road is to travel across the country, find baby boomers who have reinvented themselves and tell their stories as a way of inspiring others to live their dreams, no matter what!

Until we get the sponsorships to be able to make the “big” trip (8,000 + miles), we decided to do the same thing locally to get the ball rolling. The question was, how would we tell the stories?

Being somewhat familiar with community television, we did some research and found that our own town of East Bridgewater had a community television station at the high school. We called the Executive Director, Russ Hannagan, and were invited down to have a tour of the studio and get further information about becoming members. 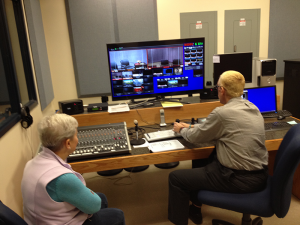 The studio is state-of-the-art. Everything is pretty new, because the high school is brand new. We learned that membership was free for citizens of the town. Russ trains everyone to use the equipment. They let you borrow camera equipment for up to three days. If you want to produce a show, they have volunteers who help with crew, you don’t have to do a thing except produce the show. They even have the editing equipment necessary to put the show together, and they’ll help you with the editing. Wow!

We started making a list of baby boomers whom we personally knew who had reinvented themselves and had interesting stories to tell. That was easy. We decided to start by interviewing each other, as a way of introducing Two Grannies on the Road to the community.

We decided to wear our Two Grannies shirts on the show. We write a script for the show which includes the questions that we will ask, where we will plug in other video, etc. We wanted the show to be more than just talking heads, so we ask our guests for photos or videos that show what they do, etc. We created a beginning and ending to the show with footage from our promotional video that was done by Dick Osso of Digital Video Productions.

After the first show, we started incorporating a “Road Trip” section, where we would travel to the town where our guest was from, explore the town, have lunch at a local favorite restaurant and in some cases interview a town official.

At this point we have completed six shows. With that, the station is putting our shows on a syndication network that they belong to. Other community television stations from around the country will have access to the show, and can play it on their local stations.

By the end of the year, we should be pretty proficient with filming, producing and editing a good show. If this is something you’ve always wanted to do, or never thought about it but think that having your own show might help you reach your goals, let us know. We’d love to help!