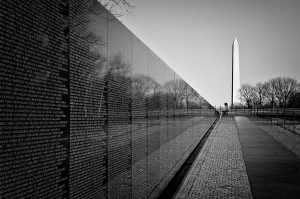 My wonderful fiancé, Roger Jones, served in the Special Forces division of the Army during the Vietnam war. He was deployed three times.  The third time he nearly lost his life, having been hit by an RPG (Repelled Rocket Grenade) and badly wounded.  It took a year of rehab for him to become whole again. He still suffers from some of the effects.

Roger saw a lot of horrible things during the war. So when he told me what hurt him the most in all his years of service, I was surprised.  It wasn’t the many scenes of death and destruction that he had witnessed. It wasn’t the hardships of living in the jungle and eating anything he could find.

It was when he arrived home from his second tour of duty.  He was walking through the airport in full uniform, feeling proud to have served his country, when one ignorant person shouted across the lobby:  “Baby killer!”

That. That hurt him more than anything he had endured.  It stuck with him, like a thorn in his side that can’t be removed.  After nearly giving his life so that this person could have freedom of speech.

I’m not arguing the virtues of war, or even that war, by any means.  I even remember getting on a bus with a lot of other college students, leaving the comforts of Smith College to protest the war in Washington, D.C. But I don’t think I ever felt that the men and boys who were on the front lines facing death were to blame for that war.  I blame the politicians in Washington for that.

I’m sure that most baby boomers remember what their thoughts were about the war, and there are many veterans of the war who have, and are still going through, some rough times both physically and emotionally because of it. Vietnam played a prominent role in the history of our generation.

Like many people today, when I meet a veteran or a current member of the military, I always thank them for their service. But in the back of my mind, I’m thinking about the insults that Roger had to endure.  It makes me very sad. He was by far not the only soldier who had to endure that abuse.

As we celebrate Memorial Day and the Fourth of July this year, who is it that YOU think about?