I was in college during the middle of the Vietnam war. I remember getting on one of many buses filled with college students headed to Washington, D.C. to protest. I also remember the day that riots broke out at Kent State University, where my then-boyfriend was a student.  It was very scary.

At the time, people who were against the war blamed the soldiers.  They would call them names, and worse. 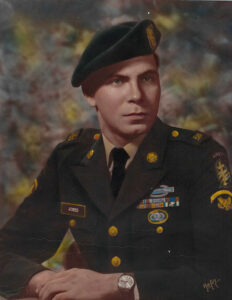 Fast forward 44 years.  I met my husband Roger, a Vietnam veteran, Army Special Forces. The stories he told me about the things that he saw, that he had to do and endure, broke my heart. He was called a baby killer at the airport. Not to mention that he was badly injured when his unit got hit with a bomb.  He was in hospitals for over a year.  His jaw had to be reconstructed and he lost almost all of his teeth. He got blood poisoning from the metal in his body and almost died. Blood clots formed in his legs. His injuries affect his health to this day. It’s amazing that, so far, he hasn’t had any effects from Agent Orange, which he was exposed to. He also lost many friends.

After all that, he is still very proud of his service to our country. Many people have thanked him for his service, a pleasant change from the name-calling of the 1970’s.

So, when the United States celebrates Veteran’s Day, it has special meaning in our house, as I know it does for all military families.  These men and women sacrifice a lot so that the rest of us can sleep at night, knowing that we live in a free country. It seems only fair that one day should be set aside specifically to thank them.

To all of the members of the armed forces, thank you for your service.