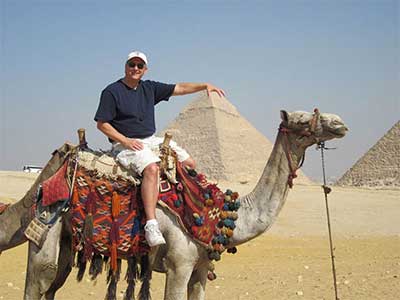 I’ve never been involved in making a video, until now.  When we decided that we wanted to create an opening video to explain what the Two Grannies are all about, I turned to my friend and client, Dick Osso of Digital Video Productions.

Dick is the consummate professional.  Initially he took the time to get a thorough understanding of what we are all about, what we want to accomplish and how we plan on doing that. Then the planning began.  At first, we just wanted to get footage of our fun day at the Adventure Park at Heritage Museum in Sandwich. Dick wanted to get some drone shots, which we eventually found out couldn’t be done at the park, so we arranged to get drone shots on a road where we could legally do so, and use those to add into shots from the ground and a Go Pro camera on the rope course. 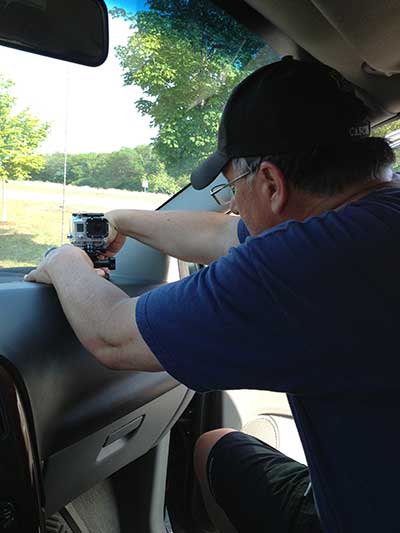 Watching Dick coordinate all the shots that would eventually make up the video reminded me of watching a musical conductor lead a symphony orchestra. First we set up a day to shoot Ginny and me heading to the park in the Lean, Green, Granny Machine – er, my green minivan! Dick worked with his drone operator to set up four different drone passes.  We drove up and down the same stretch of road four times to get each shot. One of the shots was what Dick called a “hero shot”. He had Ginny and I stand in front of the car looking at a map.  He wanted the drone to zoom in closer and then we would turn to look up at the drone.  But he shot it the opposite way!

When we got to the park, Dick set up the Go Pro hooked onto my harness so that it would get shots of what I was seeing ahead of me.  He stayed on the ground with his camera.

At this point we were probably four hours into shooting, all for the first 2 to 3 minutes of the entire video! 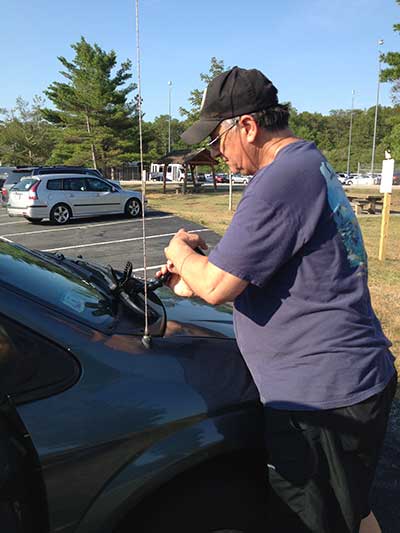 The next segment involved the speaking and workshop aspect of the Two Grannies program. Dick used some footage from a presentation that we had done previously as well as a session that we set up with a few baby boomer business owners to talk about the challenges that we face as baby boomers in the business world. Again, Dick choreographed the shots to show as much as possible of what we do and how we do it.  This was another three hour shoot.

Finally, we set up another shoot at a park, where Ginny and I talked directly about Two Grannies on the Road, who we are and our mission. Again, Dick planned every segment, some of which we filmed several times to get it right. This took a couple of hours as well.

Dick spoke frequently about getting as many crayons in the box as possible in order to be able to paint the best picture.  He always made sure that there was a variety of shots to choose from.  He then spent time explaining the process that we should use on the road while interviewing baby boomers. He even made up a list of the equipment we will need.

Finally Dick got the necessary software and music to put together an expertly edited piece that we are very proud of, and which gives a complete picture of our mission.

We can’t thank Dick enough for his knowledge, expertise and professionalism. I honestly think that these days it’s really important for every business to have an introductory video on their website. What do YOU think?