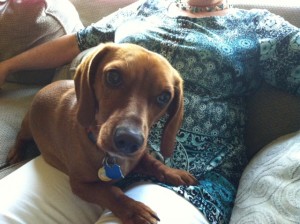 Bear usually will sit with one of us watching tv or reading.

Over the last six weeks I have been learning how to train a bear. Not the Grizzly or Polar type but my little dachshund whose name was Little Bear when we first got him from a shelter. But being the true Dachshund that he is he just never thought of himself as “little” so we dropped that part.

I first found him on a TV segment on WBZ Channel 4 News in Boston. Kerry Connolly has this portion of her newscast on Sundays called “Pets on Parade”. She highlights an animal shelter in the area each week to see how many people will think of adopting one of these adorable dogs, cats and sometimes other kinds of pets.

Well, one week she highlighted the Forever Home Rescue New England in Medfield, MA. This particular Sunday they had a beautiful Dachshund that came from either Mississippi or Arkansas (or both) and his name was Little Bear. 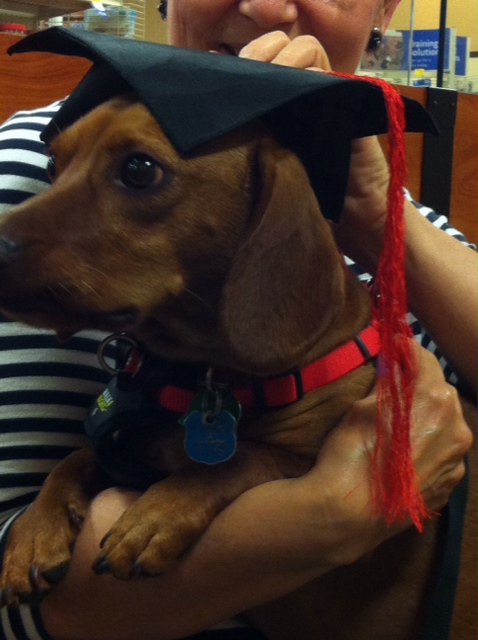 My boyfriend at the time, Paul and I fell in love with him and we brought him home to Holbrook (which is about 25 miles away) and I held this little guy the entire way home. We didn’t expect we would love him at first sight and didn’t really plan on bringing a dog home that day.

I think that period of holding him on that trip home is what brought the two of us so close because he became much closer to me than to Paul. After a number of months Paul and I realized that we were not happy and we decided to split. So I moved out and Bear stayed with Paul.

Three months after that Paul had to have surgery and he couldn’t have a rambunctious little critter running under foot during recovery. So I said I would have Bear stay with me and my roommate aka; the other Granny, (who luckily loves dogs) for a while.

Well, that was over six months ago.

Bear is a sweet little guy but Dachshunds can be very headstrong and want to be “head of household”. But we want to take Bear on our Two Grannies on the Road trip. I needed to get some help on how to make him a better behaved dog. So we went to the local PetSmart store with trainer Lisa Thurstone and got some training lessons. He was so good and learned so fast that all those people that told me that Dachshunds cannot be trained were proven wrong. Lisa was actually an incredible trainer . . . for both the dog AND me. 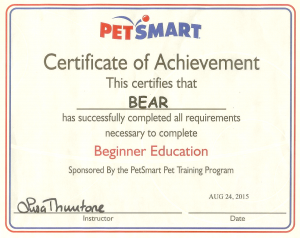 The proof is in the Diploma!

Bear now comes when called, sits and stays when told and drops items when told to “leave it” or “drop it”! He still has work to do on barking at people walking by the house but even that has improved dramatically. His socializing with other dogs has improved and he is a delightful pup to have around.

The Two Grannies are thrilled that we will have a mascot (and maybe a protector) on the trip.