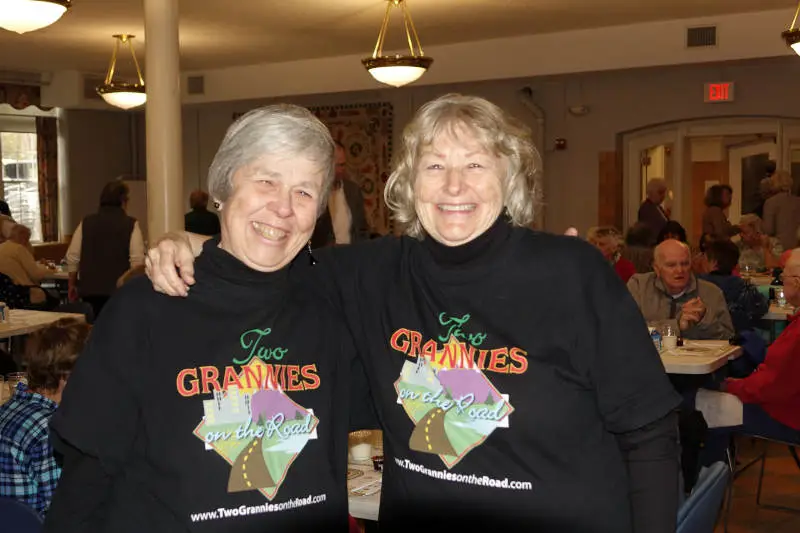 IPSWICH — There are 351 towns and cities in Massachusetts. To see them all, two grandmothers named Marcia Rothwell and Beth Sobiloff just have to visit 310 more.

After they spent a very full day in Ipswich last week — number 41 on their list — the two travelers are that little bit closer to realizing their ambition of visiting every town and city in the state.

And because of how they are doing it, it is no small feat. The pair, who live in Plymouth, make a show for their local cable TV station called Two Grannies on the Road.

Stopping off at the Council on Aging for lunch during their day-long stay, Sobiloff said the pair cannot just jump into a car and look at a town.

They research the attractions by asking locals, usually on Facebook, for recommendations. “They give us all these hidden little gems,” Rothwell said.

In Ipswich, residents suggested breakfast at the Ipswich Inn, a visit to the Crane Estate, a historical tour, a buggy ride around Appleton Farms, a stop-off at Wolf Hollow, dinner at the Clam Box, and ice cream at White Farms.

Then they have to schedule everything on the same day, Sobiloff said.

Book-ended by a two-hour drive each way, it was a long day for the grannies. But their work didn’t finish there.

Rothwell is in charge of editing the show for TV, and that will take hours more of her time. “It’s going to be a few years — let’s face it,” Sobiloff said of the project.

While Ipswich was a day trip, she said the pair took her RV to western Massachusetts, where they were able to visit five towns in a multi-day stay.

“I never slept in one before,” Rothwell said, noting that things went well on the road trip. “We were still smiling at the end.”

Asked about Ipswich, Sobiloff said, “It’s a beautiful town. The Crane Estate is just magnificent. We were in awe. It’s just jaw-dropping.”

While some in town like to keep things secret, it may become that little bit harder after the two grannies air their show. It can be seen on 25 community channels in Massachusetts and one in New Jersey.