PLYMOUTH — Size doesn’t matter, at least when it comes to how interesting any given town or city can be, as the two hosts of the travel show “Two Grannies on the Road” have both learned and shared with viewers over the years.

The show’s creator, Beth Sobiloff, and her co-host, Marcia Rothwell, have visited big and bustling Worcester and, as the most recent episode highlights, the considerably smaller town of Hubbardston. 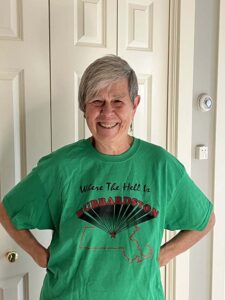 “Who knew a little town in in North Central Massachusetts with a population of a little over 4,000 would hold such hidden gems? But that’s why we do what we do.” Sobiloff says in the opening narration of the episode.

Sobiloff clearly enjoys variety, as her own life demonstrates.

The grandmother of six is a former viola player for the Brookline Symphony and Plymouth Philharmonic Orchestras who had worked as an executive assistant and office manager for years — work she described as “boring” — before reshuffling her life over a decade ago by learning and becoming certified in web design through a program at Clark University.

She soon opened her own business, Birchwood Web Design.

“I knew I had to better my situation, and the only way to do that was to do something bigger and better,” she said in the show’s premiere episode.

Her own experience as a baby boomer changing careers later in life inspired her to seek out others who had done the same, and to document their stories through recorded interviews.

She also had a love of travel; one she wasn’t able to act on as a single parent with school-age children and a full-time career.

“I was starting to have a little pity party for myself,” she said in the same episode.

As her three children got older and moved out on their own, she realized her job allowed her to work from nearly any location.

“I said, ‘Wait a second. Maybe I could actually travel and still work at the same time’,” she said.

Without steady sponsorships, travelling across the country for a few months in her RV to meet such people from all over would have been too expensive.

That’s when the focus began to shift.

“The show always included a travel segment that people always seemed to like, so it evolved into more of the travel show it’s become,” she said. 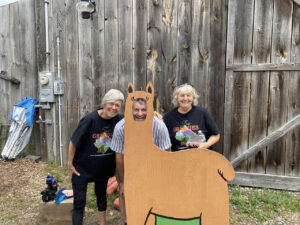 Just retired from both her business and the show in 2017. Debbie Thelan, who had already been a guest granny on a few episodes, became the new co-host until she decided to move to Florida to be near her daughter this past summer.

By the time Thelen came on board, Sobiloff had zeroed in on what the show would be.

“I told her I wanted to visit every town in Massachusetts, and she said, ‘Yes, let’s do it,’” Sobiloff said.

Other guests filled in here and there until Rothwell, a retired respiratory therapist from Sagamore Beach signed on as full co-granny.

The show has visited 45 of the state’s 351 cities and towns to date, with the most recent trip being to Attleboro Oct. 27. 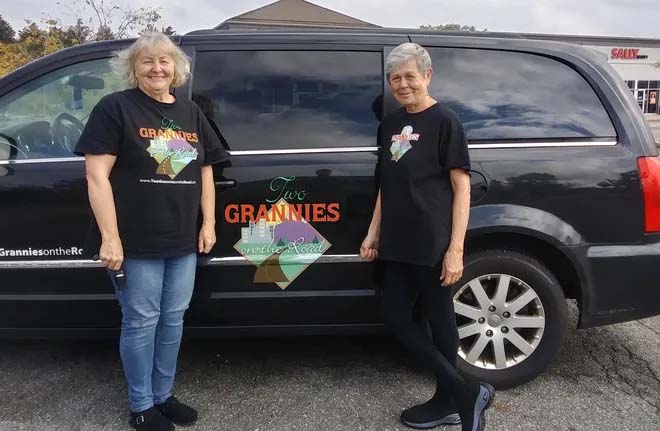 As they recently talked over coffee, Rothwell and Sobiloff share their stories with the ease of old friends, completing thoughts, finishing sentences and filling gaps while also drawing from each other a seemingly unending array of the places they’ve gone and the people they’ve met.

“We could go on all day,” Rothwell said.

Given how the words flow between them, it’s surprising to find out the two only happened to meet over the summer at a luncheon.

“We know each other pretty well now,” Rothwell said.

During that first meeting, Sobiloff began telling Rothwell about her show,

“She said it was right up her alley,” Sobiloff said.

“I said yes, even if I didn’t know what I was doing?” Rothwell added. “I’ve always been up to new and different things.”

“She dove in headfirst, poor thing,” Sobiloff said before pausing for a beat. “Just kidding; we’re having a blast.”

Getting the show on the road

The trips are from throwing a dart at a map and hitting the road right after.

“We create schedules, we set up interviews, we structure the whole day,” Sobiloff said “And we end the day with ice cream.”

The first step is often going on to a town’s community Facebook page — every town seems to have at least one.

“We go on and introduce ourselves and the show, and we ask, ‘What do we need to see? What is your town famous for? Where’s a good place for breakfast, lunch and dinner?” and those sorts of things,” Sobiloff said.

“The community tells us what they think is important in their town,” she said. “You get the touristy stuff, but you also get some very interesting suggestions.”

In addition to soliciting suggestions, the pre-production work includes connecting with a historian, official or otherwise, of each town.”

“We always want to make sure we get the history of the town,” Marcia said. 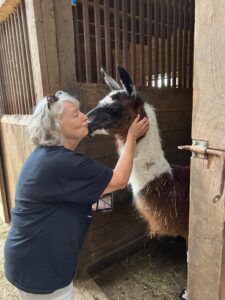 Suggestions from Hubbardstonians led them to local businesses, including Plain View Farm, where the two women were greeted enthusiastically from the local llamas to Bill and Patrick Shea’s world-record collection of Back to the Future memorabilia.

“Can you tell we don’t have any fun at all?” Rothwell said. “These are such great experiences, and anybody can have them.”

The program airs on PACTV and several affiliated stations as 30-minute episodes.

“A lot of times we have too much content for half an hour,” Sobiloff said.

YouTube picks up where PACTV leaves off by allowing her to produce multiple clips of varying lengths from one trip, as she did with their July trip to Hubbardston by posting five clips totaling a little over an hour.

Their work and their sincere interest in the communities has not gone unnoticed, either by residents or the media.

Most of the local broadcasting stations, The Boston Globe and, most recently, NPR have featured the program in recent years.

One of the highest honors, according to the pair, came when people in Hubbardston, at the initiation of the local historian they had interviewed, invited them back to premiere the full-length version of the pair’s visit.

The viewing took place in the Evangelical Church of Hubbardston, which is undergoing extensive renovations, the middle of last month.

“I didn’t know if people were going to sit there for an hour, but they did, and it was great,” she said.

The two next undertook a five-day trip to many of the towns comprising the Berkshires, this time in Sobiloff’s much-loved RV. Like her minivan, the RV features a logo of the show on its sides.

“I have so much editing to catch up on,” Sobiloff said of their extensive outing.

The show may have shifted away from baby boomers exploring their next phase of life, but that theme has cropped up repeatedly in their travels.

They encountered that, unplanned, during their Hubbardston trip.

After the restaurant where they planned to have dinner turned out to be booked, the pair decided to have an ice-cream dinner and found themselves at Topsy’s in Orange

“I go up to the window, and the woman says, ‘I saw you on Facebook,’” Sobiloff said. “Another woman comes up and then a guy comes up.”

The man turned out to be a co-owner of the chicken-and-ice cream restaurant.

“We were sitting in the car eating ice cream, and comes up and gives hats, stickers, magnets, and a box

of chicken,” she said. “It wasn’t our schedule, but we ended up taking all kinds of pictures and selfies.

As it turned out, the co-owner had been a police office before moving into the food business.

While their winter plans are still in the works, Sobiloff said she doubts they’ll be wanting options anytime soon

“People love their towns, and they’re so excited to share all kinds of stuff about it,” Sobiloff said. “The more we’re out there, the more we get invited to places.”