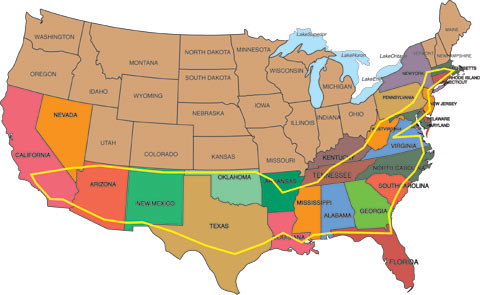 Leaving from Plymouth, Massachusetts, we will travel along the eastern seaboard along Route 95.

Virginia. We wish to avoid the beltway in Washington, DC. So we plan on going through Baltimore, Maryland and switching over to Route 70 to reach go west toward Route 81 and down toward the Shenandoah Valley in Virginia. While there we will try to meet up with BNI chapters.

Then we will be traveling back east toward Fredericksburg, Virginia to reach Route 95 again.

Now we head south toward North and South Carolina.

Into Georgia. Our first rest stop will be in Savannah, specifically to go to Paula Deen’s restaurant “The Lady & Sons”. We would love to know about other things to see and do in Georgia.

Florida. Then we are off again south to Jacksonville, Florida. We may stop here for a day, but then we are off west toward the West Coast. We will travel from Jacksonville on Route 10 through to Tallahassee (remember the Tallahassee Lassie?) to Pensacola which will bring us into Alabama. There is only a small bit of Alabama to see but we will travel through Mobile where we can meet up with some very active BNI chapters.

We may be in Alabama at the time of the Blooming Mobile: Festival of Flowers, featuring more than 300,000 square feet of landscape gardens and multitudes of breathtaking blossoms under tent and sky.

New Orleans. Then west toward Louisiana. New Orleans will definitely be a stop, maybe even for a number of days. The food, the music, the colors and smells. We have to experience it all.

From New Orleans we continue on Route 10 towards the capital, Baton Rouge.

West toward Lafayette and Lake Charles. There looks to be some good campgrounds near both towns.

Texas. Still on Route 10, we will enter Texas near Beaumont and travel towards Houston, Moody Gardens (Moody’s Standard & Poor family money built this) . . . Beautiful grounds; travel to San Antonio; The River Walk has great restaurants and night life. Free to walk through and great video blogging spot and The Alamo (A lot like Bunker Hill. The original building with some story boards) – Not sexy, but great for the purpose of video blogging and it is free.

Then on to Austin, Lake Travis, a beautiful Lake in the Texas “Hill Country”, but minutes from downtown Austin. Then we are on to Sonora and Fort Stockton; then to El Paso which will bring us into New Mexico.

Following the Route 10 will bring us in to Deming and Lordsburg. But we may want to take a jog somewhat backwards to the Carlsbad Caverns National Park. Still thinking about that.

Once out of New Mexico we enter Arizona. Following Rte. 10 we can get easily to Saguaro National Park and then to Tucson. Then up to Casa Grande and Phoenix. Then we go west toward California.

Once in California, we will cross through the southwest and into Palm Springs, San Berndaino, Escondido and finally to San Diego!

California. By now we are approximately half way on our trip. NOW we go north along the west coast up to Los Angeles. Up to Pasadena and east toward Barstow. The goal is to get to Las Vegas and Henderson. We may go up to Bonnie Springs Ranch while there, which is a recreation of an old west town complete with gun fights, hangings and the obligatory bar/saloon.

The goal is to get to the Lake Mead National Recreation Area and see the Hoover Dam. We will be in Arizona again, northern this time. We will be heading for the Grand Canyon. The jury is out as to whether we will try a donkey trip down into the canyon. I just want to stand at the canyon and yell so loud that my kids can hear me back in Massachusetts. Well, okay, maybe that won’t happen. But I do want to be totally overwhelmed by the grandeur and beauty of it all. THAT will happen, I know.

Then we will be back in New Mexico (north again). We will follow route 64 east toward Farmington, Tierra Amarilla and towards Taos. Then on to Clayton which will take us to Oklahoma.

We will follow the northern most route east through Oklahoma to Arkansas. Once there we hope to hook up with some BNI chapters and do some networking events there. But we also want to go to some haunted mansions in nortwest Arkansas. That will be a hoot!

Then into Fayetteville and Batesville. This will take us into Jonesboro and on through to Tennessee.

Once in Tennessee we hope to get to Nashville and spend some time there seeing everything to do with country music.. We also want to go to Memphis. Okay I will go to Elvis’ Graceland but then that means we also have to go to BB King’s club in Memphis as well.

Leaving Tennessee, we go into Kentucky. We want to go through the Bowling Green area, Somerset and Pikeville. This will bring us through to West Virginia.

Gettysburg. First stop, Charleston then north to Morgantown. Once in Morgantown we may see some BNI folks we met on our cruise in October. From there we head northeast to Gettysburg, Pennsylvania and all the Civil War battlegrounds. Then into Lancaster where the Amish country is. East to Philadelphia. Need to see some more historical and lovely places.

From Philly we head north toward Bethleham and Allentown. There may be no way to avoid Scranton at this point so we will head north from there to Binghampton, New York.

Northeast to Albany and then east toward home. with some “local” stops along the way. Plymouth, Massachusetts is our final destination.