A couple of grannies are taking life on the road with a mission to visit every single city and town in Massachusetts and most recently brought their travels to Worcester and Auburn. 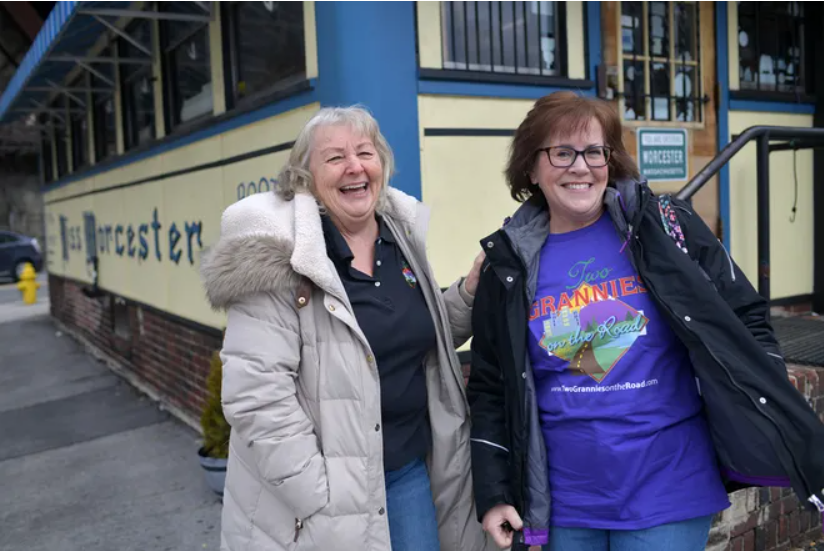 The Two Grannies on the Road, Beth Sobiloff and Debbie Thelen, have brought the day trip to a whole new level — sporting their logo T-shirts, they sometimes hop in their car and take a ride to a new place; other times, they bring their husbands along in the RV. Wherever they go, though, they always return to their Plymouth residences with smiles and new memories, all the while eagerly planning their next trip.

Sobiloff and Thelen recently traveled to Auburn for Massachusetts Maple Weekend and visited Bruce Hopper of Pure BS Maple Shack to get a tour and see the process of how syrup is made. It wasn’t the first time they’ve come to Auburn, but for Thelen, seeing a sugar shack was definitely a new experience.

“I’ve never seen the process of maple sugaring before, and it reminds me of when I make caramel sauce, all that gooey, sugary goodness ready to eat with a spoon,” said Thelen, who owns D and D Candies. “Bruce has a great personality for showing everyone the process and having us sample from sap to dark amber syrup. It was thoroughly enjoyable as well as educational.”

Sobiloff said that even though she has been to several maple sugar shacks in the past, watching the process “never gets old. Many families came to the Pure BS Maple Sugar Shack for Maple Weekend in Massachusetts. I really enjoyed watching the children discover how something from a tree becomes a delicious treat.”

The Two Grannies formed about four years ago, when Sobiloff, who owns Birchwood Web Design, hadn’t taken a vacation for a while and was looking for a way “play and work at the same time,” she recalled. She realized she could design websites from anywhere and got together with another single friend, Ginny Just, a graphic designer who would eventually create the Grannies’ logo. The two started traveling, but their focus changed when Sobiloff discovered they could host a television show on their local access channel for free. They decided to interview baby boomers who had “reinvented themselves,” she said.

Eventually, both ladies met their respective husbands and went their separate ways, with Sobiloff continuing the Two Grannies. She enlisted the help of some “guest grannies,” and crossed paths with Thelen, whom Sobiloff interviewed about her candy-making business. Thelen said she had so much fun that she asked to be the “full-time Granny,” and from there, the two have been traveling, discovering new places and unique restaurants and shops, and telling everyone about it through their YouTube videos.

The Grannies have visited nearly 30 towns, including Shrewsbury, Spencer, Marlboro, Sturbridge, Princeton, New Bedford, Hull, Marshfield, Scituate, Pembroke and Adams. In each — and all those to come — they love to learn about the history of each community. All in all, they said, the experiences have been wonderful, the people very friendly and the restaurants delectable.

“I can’t even begin to tell you how many restaurants we’ve been to that are so amazing,” Thelen said.

After visiting a town, the Grannies will often put together short clips that they post on their Facebook page (https://facebook.com/twogranniesontheroad), and then they produce longer segments that highlight their activities from a particular town’s visit. They recently finished editing and posting their footage from last August’s first visit to Auburn, when they had breakfast at the Coffee Mug with state Rep. Paul K. Frost, learned about the town at the Auburn Historical Society Museum, went to the site of Robert Goddard’s first rocket launch, played miniature golf at Crystal Caves, and stopped at Major League Roast Beef and Coco’s Tropical Ice.

“We want to help promote local businesses because that’s really important,” Sobiloff said. “Local businesses are the heart of this country. We’re part of it.”

During their late February trip to Worcester, the Grannies went to Miss Worcester Diner — which was “just unbelievable,” Sobiloff said — as well as the Worcester Historical Museum and Table Talk Pies, and talked with Katherine Aguilar, owner of K Sense Co., located in the Worcester Public Market. Sometimes, their travels lead them to the unexpected — though they had already planned to tour Polar Park, while there, they were surprised to meet singer Bob Cowsill, who was performing that day inside.

“That’s the fun stuff that happens when you travel,” Sobiloff said.

Through their travels, the Grannies also want to encourage boomers like themselves to live their best lives and never stop exploring. In addition, they would love to help connect boomers and millennials. “The two generations have so much to offer,” Sobiloff said.

Although the COVID pandemic and resulting quarantine slowed their travels for a time, they had accumulated enough footage from prior trips that they were able to continue making and posting videos. Now that they can freely travel again, the Grannies hope to take two trips a month; next on their itinerary are Hubbardston and Sudbury, as well as exploring some other spots around Plymouth. They love getting recommendations for which towns to visit, as well as what to see when in those communities. Oftentimes, they’ll post on town’s social media forums for suggestions, and they hope to eventually get some sponsorships.

“We’re going to try to do the lesser-known places so that people who watch our show say, ‘That’s interesting; I want to go there,’” Thelen said.

“We have a pretty good state, I have to say. I love Massachusetts. You have the mountains, water, cranberry bogs,” Sobiloff said. “We just love doing this.”