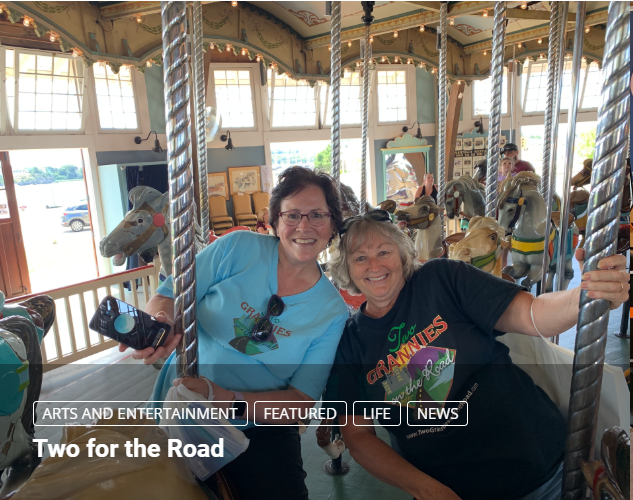 Beth Sobiloff and Debbie Thelen are on a mission. These  “Grannies on the Road” are planning to make stops at all 312 towns and 39 cities across 14 counties within the state of Massachusetts, all in short order. Earlier this year, the young-at-heart grandmothers’ epic journey began in the state’s oldest town, Plymouth, where the two tape their increasingly popular show, Two Grannies on the Road, at the Plymouth Community Television studios.

When asked on a recent trip to Hull why they have put this daunting task on their to-do list, Sobiloff enthuses that “it’s all about inspiring others to follow their passion and have fun doing it.” A philosophy that Sobiloff and fellow Grannie Thelen follow every day.

I caught up with the pair at the historic Paragon Carousel on Nantasket Beach on a perfect summer day a few weeks ago. Before meeting up the duo had already spent hours traveling the length of the 7-mile peninsula twice on the town’s Hull O Trolley—a free weekend service that is narrated by volunteer tour guides—stopping frequently to enjoy and record the sights, sounds, attractions, and food  (including several flavors of ice cream) along the way. With a professional video camera in hand, Sobiloff captures all aspects of their adventures, interacting with folks they meet along the way and recording Thelen trying out new experiences. Sobliloff will also spend countless hours editing the footage into a new show that will highlight the wonders the two discovered in this town, as she’s already done for recent visits to Scituate and Plymouth.

While married and raising children, Sobiloff had always wanted to do a cross-country trip in a van with the family in tow—a great adventure. But in 2010, she found herself single, her youngest son about to graduate college, and she hadn’t had a vacation in years. And despite running a successful web design business since 2000, she still yearned for more. The launch of Two Grannies on the Road began after Soblioff  had what she refers to as “a little pity party for myself.”   But she didn’t brood for long. Her “ah ha” moment quickly followed. Feeling inspired, she “realized I had a business that I could do from anywhere, so maybe I could travel and still do that.” From then, the creative juices kicked in and ideas started flying. “My brain was on overdrive,” she recalls. But not wanting to venture forth alone, she enlisted an enthusiastic friend and graphic designer, Ginny Just. Employing their well-honed skills, an eye-catching logo and website were soon designed, and then they went in search of major sponsors to support their dream of travelling America in a “rock star” type of van from which they could carry forth their mission to all corners of the country. “Everyone loved the idea,” Sobiloff recalls.

When big sponsors didn’t materialize, they scaled back and kept their focus local, but soon became discouraged with the project and went their separate ways for a while. After a few years they revived Two Grannies on the Road. Sobiloff says at that time “we began to notice a lot of ageism happening. I was told I was too old to do web design and many of our friends were getting laid off six months before they were due to retire, so they started to reinvent themselves, to go into their second life.” That’s when they began to focus on Baby Boomers who were finding ways to follow their passion. They hooked up with a community cable station, learned all the ropes from camera operation to editing,  and started producing shows with a focus on Boomers.

Their theme, “We’re getting better, not older,” resulted in a raft of shows featuring acupuncturists, organic food producers, a fitness after 45 professional, and multiple shows on alternative and complementary health therapies. After each show they would enjoy a meal that got them thinking about food as a subject. “How-to” shows evolved as they interviewed yarn spinners and cheese makers in Vermont to a man in Hawaii who took up coffee roasting in his later years.

When Jost retired two years ago—from her career and the Grannies– Sobiloff would routinely enlist the talent of “guest” Grannies to continue producing the cable series. Thelen became a fast friend after Sobiloff met and married her husband, Roger, and purchased a house in Plymouth, not far from Thelen’s home.

Thelen and husband Don, an army veteran, retired to Plymouth after he was last stationed at Ft. Devens. For 37 years she had been an optician in Connecticut, but had a 47-year candy-making hobby that was always her passion. When settled in Plymouth, Thelen launched D and D Candies, and the hands-on business grew and satisfied her creative side.

“The first time Beth asked me to be a guest Grannie we had so much fun!” Thelen gushes. “When I eventually told Beth I wanted to be a full-time Grannie, she threw her hands up in the air and cheered!” Soblioff laughs along saying, “She may be the new Grannie, but she got right into it.”

What’s in the future for the Grannies? Thelen hopes to make their way south to Florida, then across the lower 48 and up to Alaska, still hoping for major sponsors to take an interest in the Grannie quest to inspire others while they are on the road. Both Grannies envision a luxe RV emblazoned with their own logo along with those of major sponsors to transport over America’s highway and byways.

Sobiloff says their main goal is to spread fun, inspire others to follow their passion, all while having fun themselves. “White water rafting on the Colorado River is on my bucket list,” Soblioff says with determination and a twinkle in her eyr=e.

If you live in Massachusetts, you can be sure that Two Grannies on the Road will be visiting your town soon. Keep your eyes open for their arrival, as you’ll want to connect with these energetic and fun-loving Grannies. You might even be interviewed for one of their upcoming episodes. If you are in the Plymouth area, you can catch Sobliloff and Thelen’s shows on PACT TV (www.pactv.org), or you can watch Two Grannies on the Road on their YouTube channel, and you can access more information about the fun-loving Grannies on their website, www.twogranniesontheroad.com.