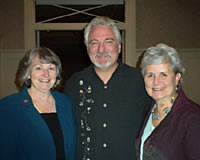 united states of america – across the globe

Dr. Ivan Misner with Beth Sobiloff and Ginny JustTwo Grannies on the Road

Friends Ginny Just, a graphic designer, and Beth Sobiloff, a web designer, are grandmothers ready for adventure. Having had a long-time dream of traveling across the country, they decided to find a way to keep their businesses going while on the road. Thus, Two Grannies on the Road was born.

These Baby Boomers put their creative juices to work on a plan to network their way across the country while still earning a living. Having built their businesses by word-of-mouth referrals, they put their experience and contacts to work.

The Two Grannies plan to start their journey in March 2010, and over a two-month period travel in an RV (The Lean, Green, Granny Machine) from Massachusetts, down the East Coast to Florida, and across the country to California. During that time, they will continue to run their businesses.

Sure, they both have the advantage of having virtual businesses. But they want to demonstrate the power of networking, both online and offline, in building a business. As such, they will plan networking events along the way.

Sobiloff, an assistant director in Southeastern Massachusetts, plans to connect with executive directors of regions they will be visiting to see if they would be interested in holding an event, such as speed networking or a networking relay, a phrase which the Two Grannies have coined.

Since BNI is about Givers Gain, the Two Grannies plan on hiring BNI members along the way to get a massage, have the RV cleaned, and videotape their adventures. They also plan on having an Internet radio station where they can interview local, unique businesses to give them media exposure.

The Two Grannies are looking for sponsorships from national companies as well as advertisers for their web site, twogranniesontheroad.com. They plan on using online networking, such as their blog, Facebook and Twitter, to drive traffic to their web site and thus make it attractive to advertisers. In addition, anyone can participate by going to twogranniesontheroad.com/tribute-to-grandma.htm, and for $5, add a dedication or tribute to their grandmother, which will appear in a scrolling bar on the page.

The Two Grannies plan on donating a portion of all proceeds from the trip to the Misner Foundation.

Stay tuned for updates on the progress of the Two Grannies when they hit the road in March!